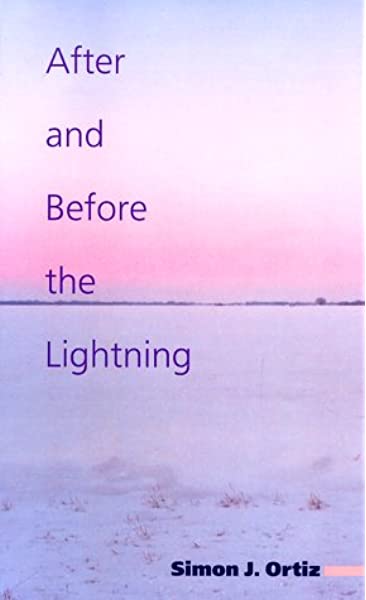 After and Before the Lightning

Highway 18 between Mission and Okreek, South Dakota, is a stretch of no more than eighteen miles, but late at night or in a blizzard it seems endless. "It feels like being somewhere between South Dakota and 'there,'" says Simon Ortiz, "perhaps at the farthest reaches of the galaxy."

Acoma Pueblo poet Ortiz spent a winter in South Dakota, teaching at Sinte Gleska College on the Rosebud Lakota Sioux Reservation. The bitter cold and driving snow of a prairie winter were a reality commanding his attention through its absolute challenge to survival and the meaning of survival.

Ortiz's way of dealing with the hard elements of winter was to write After and Before the Lightning, prose and verse poems that were his response to that long season between the thunderstorms of autumn and spring. "I needed a map of where I was and what I was doing in the cosmos," he writes. In these poems, which he regards as a book-length poetic work, he charts the vast spaces of prairie and time that often seem indistinguishable. As he faces the reality of winter on the South Dakota reservation, he also confronts the harsh political reality for its Native community and culture and for Indian people everywhere.

"Writing this poetry reconnected me to the wonder and awe of life," Ortiz states emphatically. Readers will feel the reality of that wonder and awe—and the cold of that South Dakota winter—through the gentle ferocity of his words.