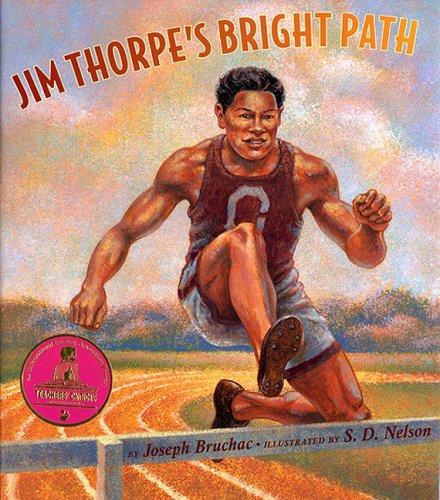 A biography of the legendary Native American Jim Thorpe (1888-1953), voted the Greatest Football Player and Greatest Athlete of the Half-Century by two AP polls, focusing on his early childhood and how school and sports shaped his future.

From the day he was born, Jim Thorpe's parents knew he was special. As the light shone on the road to the family's cabin, his mother gave Jim another name - Wa-tho-huck - Bright Path.

Jim's athletic skills were evident early on, as he played outdoors and hunted with his father and twin brother. When the boys were sent to Indian boarding school, Jim struggled in academics but excelled in sports. Jim moved from school to school over the years, overcoming family tragedies, until his athletic genius was recognized by Coach Pop Warner at the Carlisle Indian School.

From the award-winning team of Joseph Bruchac and S. D. Nelson comes an inspiring biography of the young person behind the world-renowned athlete. Thorpe's story of determination and perseverance will resonate with every child who dreams of finding his or her own bright path.