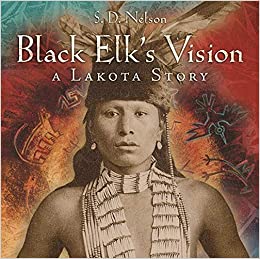 Black Elk (1863–1950) was a Lakota-Oglala medicine man and a cousin of Crazy Horse. This biographical account follows him from childhood through adulthood, recounting the visions he had as a young boy and describing his involvement in the battles of Little Big Horn and Wounded Knee, as well as his journeys to New York City and Europe with Buffalo Bill’s Wild West Show.

Award-winning author and member of the Standing Rock Sioux tribe S. D. Nelson tells the story of Black Elk through the voice of the medicine man, bringing to life what it was like to be Native American from the mid-nineteenth century to the early twentieth century. The Native people found their land overrun by the wasichus (White Man), the buffalo slaughtered for sport, and their people gathered onto reservations.

Interspersing archival images with his own artwork, inspired by the ledger-art drawings of the nineteenth-century Lakota, Nelson conveys how Black Elk clung to his childhood vision, which planted the seeds to help his people—and all people—understand their place in the Circle of Life. Backmatter includes a Lakota description of the Circle of Life, a brief history of the Lakota and a timeline.