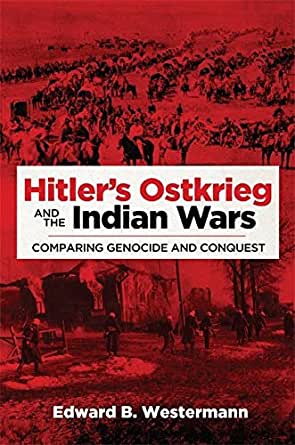 Hitler's Ostkrieg and the Indian Wars: Comparing Genocide and Conquest

As he prepared to wage his war of annihilation on the Eastern Front, Adolf Hitler repeatedly drew parallels between the Nazi quest for Lebensraum, or living space, in Eastern Europe and the United States’s westward expansion under the banner of Manifest Destiny. The peoples of Eastern Europe were, he said, his “redskins,” and for his colonial fantasy of a “German East” he claimed a historical precedent in the United States’s displacement and killing of the native population. Edward B. Westermann examines the validity, and value, of this claim in Hitler's Ostkrieg and the Indian Wars.

The book takes an empirical approach that highlights areas of similarity and continuity, but also explores key distinctions and differences between these two national projects. The westward march of American empire and the Nazi conquest of the East offer clear parallels, not least that both cases fused a sense of national purpose with racial stereotypes that aided in the exclusion, expropriation, and killing of peoples. Westermann evaluates the philosophies of Manifest Destiny and Lebensraum that justified both conquests, the national and administrative policies that framed Nazi and U.S. governmental involvement in these efforts, the military strategies that supported each nation’s political goals, and the role of massacre and atrocity in both processes. Important differences emerge: a goal of annihilation versus one of assimilation and acculturation; a planned military campaign versus a confused strategy of pacification and punishment; large-scale atrocity as routine versus massacre as exception.

Comparative history at its best, Westermann’s assessment of these two national projects provides crucial insights into not only their rhetoric and pronouncements but also the application of policy and ideology “on the ground.” His sophisticated and nuanced revelations of the similarities and dissimilarities between these two cases will inform further study of genocide, as well as our understanding of the Nazi conquest of the East and the American conquest of the West.