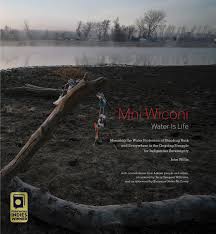 Mni Wiconi/Water Is Life: Honoring the Water Protectors at Standing Rock and Everywhere in the Ongoing Struggle for Indigenous Sovereignty

Viewing Mni Wiconi (Sacred Water of Life) and the No Dakota Access Movement as an isolated happening without acknowledging historical, cultural, and systematic circumstances leading up to it makes no sense. We cannot erase this past nor change it. In order to move forward in a better way, however, we must acknowledge the truthful foundation and recurring practices complicating what to some feel like isolated incidences. The pervasive and growing presence of extreme economic inequality in America is a worsening condition. Few situations reveal this inequality more than the conditions that Native Americans live under within their own homeland.

This book raises awareness of Water Protectors for those who were not at Standing Rock and honoring those who were, through experiences at the Oceti Sakowin Camp, the indigenous-led resistance movement by the Standing Rock Sioux Tribe against the Energy Transfer Partners project to build the Dakota Access Pipeline on sacred land. The goal is to acknowledge and better understand the dedication of the Water Protectors, as they chose to be called, standing up for the health of Mni Wiconi and so many other related causes for the seven generations representing the past, present, and future health of all.

People throughout the world, including members from between 240–300 indigenous tribes, were attracted to the cause and came to Standing Rock in full support of the protests. Even American military veterans, distressed by what they saw, came by the thousands determined to stand between the Water Protectors and police in defense of the rights for non-violent expression of resistance.

The book’s powerful photographs by John Willis are complimented by many Lakota voices and those of other allies through interviews, poetry, Lakota artwork, music through a downloadable CD, and historical ephemera. And essays by Terry Tempest Williams and Shaunna Oteka-McCovey provide new insights into age-old problems facing native people.