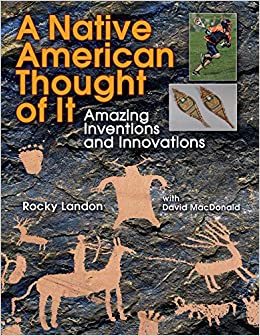 A Native American Thought of It: Amazing Inventions and Innovations - Grades : 4 - 6

Everyone knows that moccasins, canoes and toboggans were invented by the Aboriginal people of North America, but did you know that they also developed their own sign language, syringe needles and a secret ingredient in soda pop? Depending on where they lived, Aboriginal communities relied on their ingenuity to harness the resources available to them. Some groups, such as the Iroquois, were particularly skilled at growing and harvesting food. From them, we get corn and wild rice, as well as maple syrup. Other groups, including the Sioux and Comanche of the plains, were exceptional hunters. Camouflage, fish hooks, and decoys were all developed to make the task of catching animals easier. And even games—lacrosse, hockey and volleyball—have Native American roots. Other clever inventions and innovations include the following: • Sunscreen • Surgical blades • Diapers • Asphalt • Megaphones • Hair conditioner With descriptive photos and information-packed text, this book explores eight different categories in which the creativity of First Nations peoples from across the continent led to remarkable inventions and innovations, many of which are still in use today.