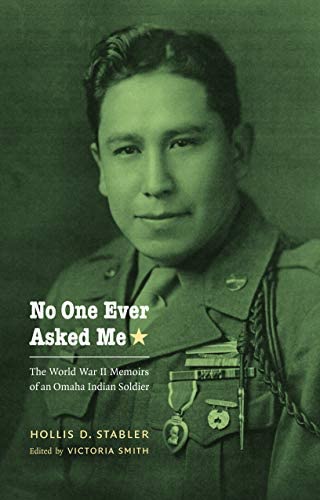 No One Ever Asked Me: The World War II Memoirs of an Omaha Indian Soldier

As a young adolescent, Hollis Dorion Stabler underwent a Native ceremony in which he was given the new name Na-zhin-thia, Slow to Rise. It was a name that no white person asked to know during Hollis's tour of duty in Anzio, his unacknowledged difference as an Omaha Indian adding to the poignancy of his uneasy fellowship with foreign and American soldiers alike. Stabler’s story—coming of age on the American plains, going to war, facing new estrangement upon coming home—is a universal one, rendered wonderfully strange and personal by Stabler’s uncommon perspective, which embraces two worlds, and by his unique voice.

Stabler's experiences during World War II—tours of duty in Tunisia and Morocco as well as Italy and France, and the loss of his brother in battle—are at the center of this powerful memoir, which tells of growing up as an Omaha Indian in the small-town Midwest of Nebraska, Iowa, Kansas, and Oklahoma in the 1920s and 1930s. A descendant of the Indians who negotiated with Lewis and Clark on the Missouri River, Stabler describes a childhood that was a curious mixture of progressivism and Indian tradition, and that culminated in his enlisting in the old horse cavalry when war broke out—a path not so very different from that walked by his ancestors. Victoria Smith, of Cherokee-Delaware descent, interweaves historical insight with Stabler’s vivid reminiscences, providing a rich context for this singular life. Paperback. 2008.