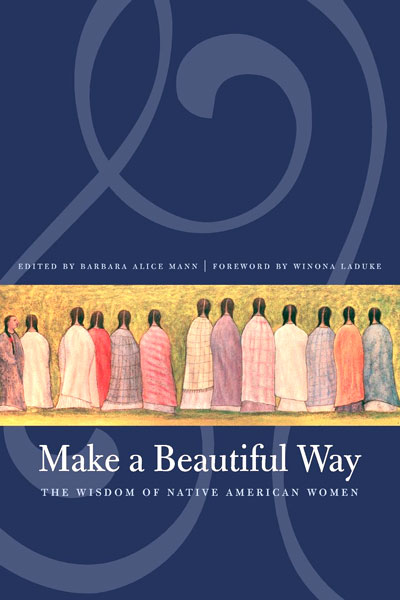 Make a Beautiful Way: The Wisdom of Native American Women

Make a Beautiful Way is nothing less than a new way of looking at history—or more correctly, the reestablishment of a very old way. For too long, Euro-American discourse styles, emphasizing elite male privilege and conceptual linearity, have drowned out democratic and woman-centered Native approaches. Even when myopic western linearity is understood to be at work, analysis of Native American history, society, and culture has still been consistently placed in male custody. The recovery of women’s traditions is the overarching theme in this collection of essays that helps reframe Native issues as properly gendered.

Paula Gunn Allen looks at Indian lifeways through the many stitches of Indian clothes and the many steps of their powwow fancy dances. Lee Maracle calls for reconstitution of traditional social structures, based on Native American ways of knowing. Kay Givens McGowan identifies the exact sites where female power was weakened through the imposition of European culture, so that we might more effectively strengthen precisely those sites. Finally, Barbara Alice Mann examines how communication between Natives who have federal recognition and those who do not, as well as between Natives east and west of the Mississippi, became dysfunctional, and outlines how to reestablish good relations for the benefit of all. Paperback. 2008.