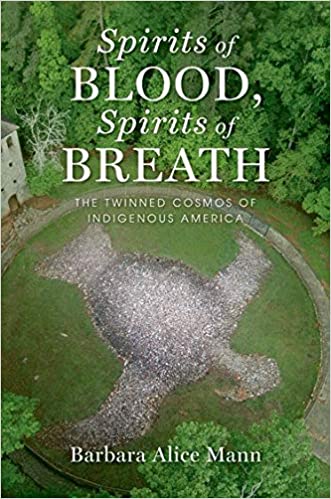 Spirits of Blood, Spirits of Breath: The Twinned Cosmos of Indigenous America

Before invasion, Turtle Island-or North America-was home to vibrant cultures that shared long-standing philosophical precepts. The most important and wide-spread of these was the view of reality as a collaborative binary known as the Twinned Cosmos of Blood and Breath. This binary system was built on the belief that neither half of the cosmos can exist without its twin. Both halves are, therefore, necessary and good. Western anthropologists typically shorthand the Twinned Cosmos as "Sky and Earth" but this erroneously saddles it with Christian baggage and, worse, imposes a hierarchy that puts sky quite literally above earth. None of this Western ideology legitimately applies to traditional Indigenous American thought, which is about equal cooperation and the continual recreation of reality.

Spirits of Blood, Spirits of Breath examines traditional historical concepts of spirituality among North American Indians both at and, to the extent it can be determined, before contact. In doing so, Barbara Alice Mann rescues the authentically indigenous ideas from Western, and especially missionary, interpretations. In addition to early European source material, she uses Indian oral traditions, traced as much as possible to their earliest versions and sources, and Indian records, including pictographs, petroglyphs, bark books, and wampum. Moreover, Mann respects each Indigenous culture as a discrete unit, rather than generalizing them as is often done in Western anthropology. To this end, she collates material in accordance with actual historical, linguistic, and traditional linkages among the groups at hand, with traditions clearly identified by group and, where recorded, by speaker. In this way she provides specialists and non-specialists alike a window into the purportedly lost, and often caricatured, world of Indigenous American thought. Paperback. 2016.