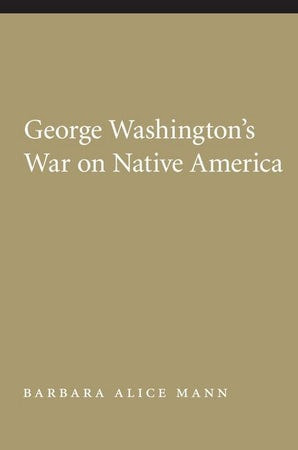 The Revolutionary War is ordinarily presented as a conflict exclusively between colonists and the British, fought along the northern Atlantic seacoast. George Washington’s War on Native America recounts the tragic events on the forgotten western front of the American Revolution—a war fought against and ultimately won by Native America. Although history texts often erroneously present the Natives, primarily the Iroquois League and the Ohio Union, as “allies” (or lackeys) of the British, Native America was in fact working from its own agenda: to prevent settlers from invading the Old Northwest.

Throughout the war, the unwavering goal of the Revolutionary Army, under George Washington, and its associated settler militias was to break the power of the Iroquois League, which had successfully held off invasion for the preceding two centuries, and the newly formed Ohio Union. To destroy the Natives who stood in the way of land seizure, Washington authorized a series of rampages intended to destroy the League and the Union by starvation. As a result, uncounted thousands of Natives perished from New York and Pennsylvania to Ohio. Barbara Alice Mann tells how, in the wake of the massive assaults, Native America nonetheless won the war in the West and managed to maintain control of the land west and north of the Allegheny–Ohio River systems. Paperback. Mann, Barbara. 2009.