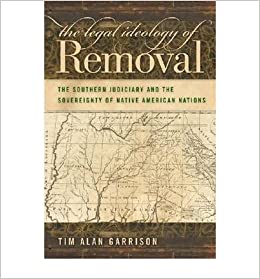 The Legal Ideology of Removal: The Southern Judiciary and the Sovereignty of Native American Nations

This study is the first to show how state courts enabled the mass expulsion of Native Americans from their southern homelands in the 1830s. Our understanding of that infamous period, argues Tim Alan Garrison, is too often molded around the towering personalities of the Indian removal debate, including President Andrew Jackson, Cherokee leader John Ross, and United States Supreme Court Justice John Marshall. This common view minimizes the impact on Indian sovereignty of some little-known legal cases at the state level.

Important in its own right, jurisprudence on Indian matters in the antebellum South also complements the legal corpus on slavery. Readers will gain a broader perspective on the racial views of the southern legal elite, and on the logical inconsistencies of southern law and politics in the conceptual period of the anti-Indian and proslavery ideologies. Paperback. 2002.