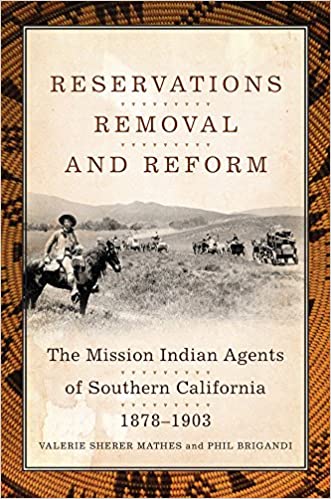 Inseparable from the history of the Indians of Southern California is the role of the Indian agent—a government functionary whose chief duty was, according to the Office of Indian Affairs, to “induce his Indian to labor in civilized pursuits.” Offering a portrait of the Mission Indian agents of the late nineteenth and early twentieth centuries, Reservations, Removal, and Reform reveals how individual agents interpreted this charge, and how their actions and attitudes affected the lives of the Mission Indians of Southern California.

This book tells the story of the government agents, both special and regular, who served the Mission Indians from 1850 to 1903, with an emphasis on seven regular agents who served from 1878 to 1903. Relying on the agents’ reports and correspondence as well as newspaper articles and court records, authors Valerie Sherer Mathes and Phil Brigandi create a vivid picture of how each man—each a political appointee tasked with implementing ever-changing policies crafted in far-off Washington, D.C.—engaged with the issues and events confronting the Mission Indians, from land tenure and water rights to education, law enforcement, and health care.

Providing a balanced, comprehensive view of the world these agents temporarily inhabited and the people they were called to serve, Reservations, Removal, and Reform deepens and broadens our understanding of the lives and history of the Indians of Southern California. Hardcover. 2018.