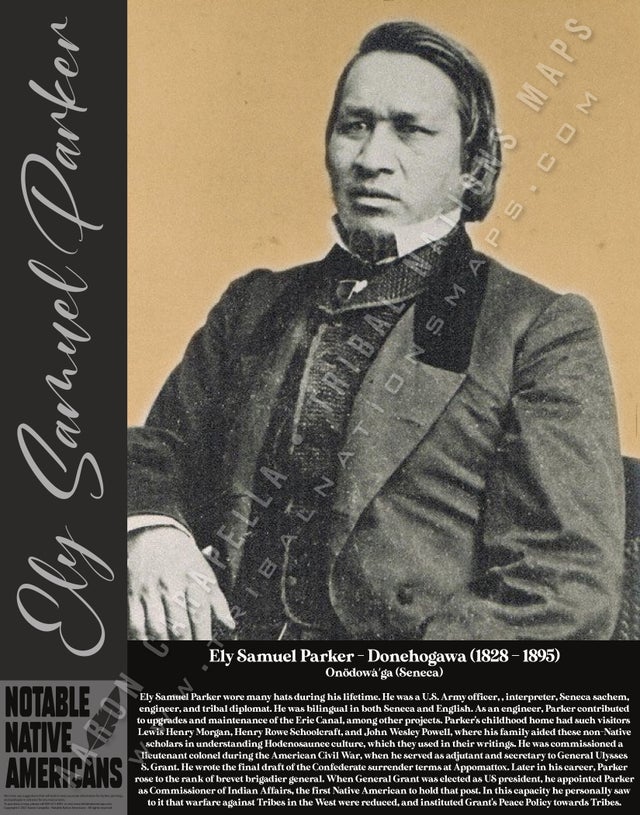 Ely Samuel Parker wore many hats during his lifetime. He was a U.S. Army officer, , interpreter, Seneca sachem, engineer, and tribal diplomat. He was bilingual in both Seneca and English. As an engineer, Parker contributed to upgrades and maintenance of the Erie Canal, among other projects. Parker's childhood home had such visitors  Lewis Henry Morgan, Henry Rowe Schoolcraft, and John Wesley Powell, where his family aided these non-Native scholars in understanding Hodenosaunee culture, which they used in their writings. He was commissioned a lieutenant colonel during the American Civil War, when he served as adjutant and secretary to General Ulysses S. Grant. He wrote the final draft of the Confederate surrender terms at Appomattox. Later in his career, Parker rose to the rank of brevet brigadier general. When General Grant was elected as US president, he appointed Parker as Commissioner of Indian Affairs, the first Native American to hold that post. In this capacity he personally saw to it that warfare against Tribes in the West were reduced, and