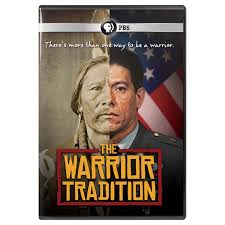 The Warrior Tradition tells the astonishing, heartbreaking, inspiring, and largely untold story of Native Americans in the United States military. The film chronicles the accounts of Native American warriors from their own points of view - stories of service and pain, of courage and fear. The old duality of the Noble Savage/helpless victim has dominated our cultural portrait of Native Americans for fifty years. But it's a more complicated story. Indian warriors have a wide mix of emotions and motives - patriotism, pride, rage, courage, practicality, and spirituality all mingle with an abiding respect for tribal, familial, and national traditions. Even the numbers tell a story. During World War I, not all Native Americans were even citizens of the United States and couldn't be drafted; yet more than 12,000 Indian men volunteered. Even in an unpopular war in Vietnam, 90 percent of the 42,000 Native people who served were volunteers. The roll call of valor is endless. But there's more to the story than heroism, and more than one way to be a warrior.