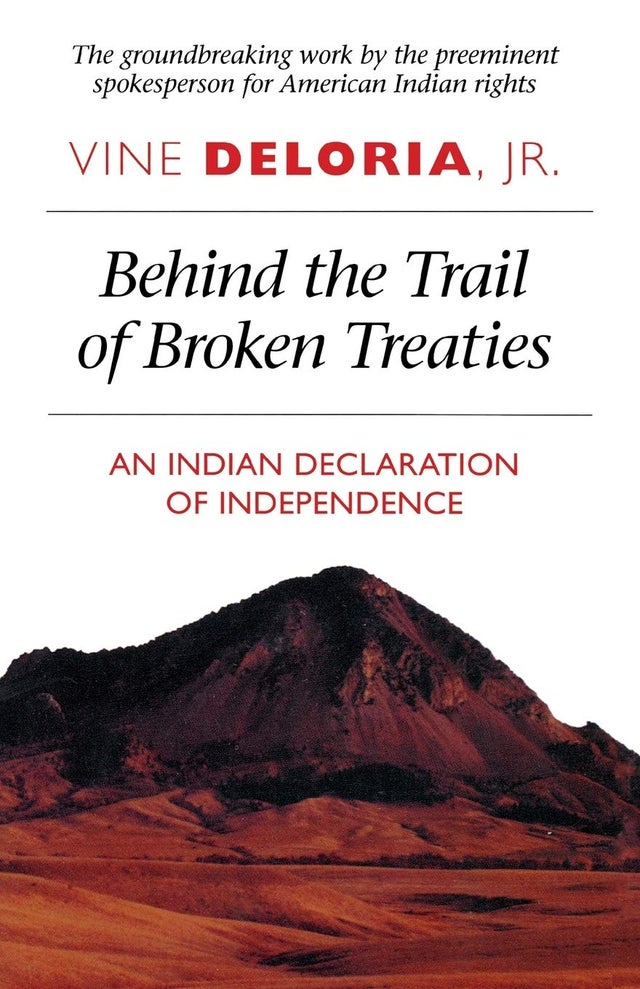 Behind the Trail of Broken Treaties: An Indian Declaration of Independence

Originally published in 1974, just as the Wounded Knee occupation was coming to an end, Behind the Trail of Broken Treaties raises disturbing questions about the status of American Indians within the American and international political landscapes. Analyzing the history of Indian treaty relations with the United States, Vine Deloria presents population and land ownership information to support his argument that many Indian tribes have more impressive landholdings than some small members of the United Nations. Yet American Indians are not even accorded status within the UN's trust territories recognition process.

A 2000 study published by the Annual Survey of International and Comparative Law recommends that the United Nations offer membership to the Iroquois, Cherokee, Navajo, and other Indian tribes. Ironically, the study also recommends that smaller tribes band together to form a confederation to seek membership—a suggestion nearly identical to the one the United States made to the Delaware Indians in 1778—and that a presidential commission explore ways to move beyond the Doctrine of Discovery, under which European nations justified their confiscation of Indian lands. Many of these ideas appear here in this book, which predates the 2000 study by twenty-six years. Thus, Behind the Trail of Broken Treaties anticipates recent events as history comes full circle, making the book imperative reading for anyone wishing to understand the background of the movement of American Indians onto the world political stage.

In the quarter century since this book was written, Indian nations have taken great strides in demonstrating their claims to recognized nationhood. Together with Tribes, Treaties, and Constitutional Tribulations, by Deloria and David E. Wilkins, Behind the Trail of Broken Treaties highlights the historical events that helped bring these changes to fruition. At the conclusion of Behind the Trail of Broken Treaties, Deloria states: "The recommendations made in the Twenty Points and the justification for such a change as articulated in the book may well come to pass in our lifetime." Now we are seeing his statement come true.